Nowadays injection of liquid medication and vaccines still almost exclusively goes via a long hypodermic needle that has to go right through the skin to get into the bloodstream. Hereby, the needle comes in contact with the nervous system what often is perceived as very painful. But luckily the solution to this is near. It is to be expected that future drug-injections will take place by means of a plaster or a smart applicator with a plurality of micro-needles with a length of less than 1mm attached. Because a microneedle penetrates only in the upper layer of the skin, they do not touch any nerves, making this method of administration much less painful. An additional advantage of the use of microneedles is that the risk of infection is much smaller because the needles do not come into direct contact with blood. Microneedles can be manufactured either in hollow or solid form. Solid needles can be coated with the drug or can be uncoated. If uncoated the needles are just used to create tiny holes in the skin after which a patch with the drug is applied. 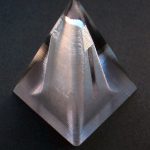 Hollow microneedles basically are miniature versions of the traditional hypodermic needle. Compared to hollow needles, solid needles are easier to manufacture. Drug injection systems that are equipped with hollow microneedles are only slowly winning ground with respect to the conventional injection needle. One of the main reasons is that the manufacturing methods that are currently at hand for the production of hollow micro-needles cannot compete from a cost perspective with the production of conventional injection needles.

The scarce amount of needles that are currently available on the market are predominantly made of silicon-based materials, and are obtained via batch production processes adapted from the semiconductor industry. Cost effective solid polymeric microneedles can be made relatively easily  via injection moulding, however a post-processing step like laser drilling is necessary to create a hollow microneedle. In the framework of the European research project FaBiMed, Promolding in co-operation with a number of partners has realized the manufacturing of hollow plastic micro needles in a one step by means of injection molding. 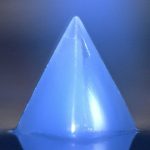 The aim of the FaBiMed project is to improve and develop new manufacturing techniques, based on micro-moulding, specifically for biomedical micro-devices.  The project aims to reduce the cost of mass production of diagnosis and therapeutic micro-devices which have common problems of small batch sizes, frequent demands for customisation, and micron-scale geometric features.  Promolding is a work-package leader and responsible for the mould design and manufacturing as well as for the injection moulding of the micro-devices.

One of the main challenges in the realization of hollow microneedles was to construct a mould in which the tiny metal cores pins, that forms the hole in the needle, do not succumb under the extremely high injection pressure of the molding processing. The microneedle patch is developed as a disposable and is placed in a applicator developed by consortium partner and medical device manufacturer Crospon

The dimensions of the fabricated microneedle patch are 32×32 mm with a thickness of 1 mm. There are 9 needles per array arranged in 3×3 geometry in which the separation distance between the needles is 1 cm. The needles have the shape of a pyramid, with a length of 1 mm, a width at the base of 0.8 mm and they have two tiny holes with a length of 0.18 mm and a width of 0.06mm.